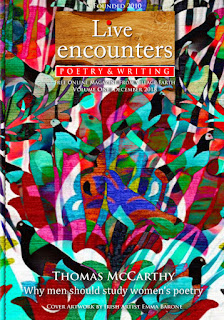 Congratulations to Mark Ulyseas publisher/editor on celebrating the ninth birthday of Live Encounters. Guest editorial is by poet, Thomas McCarthy, who writes on why men should study women's poetry. From the intriguing cover by Emma Barone to the rich, textured selection of poems throughout, it is a true endorsement of the WORD.

I am delighted, as always, to be included in this issue with a sequence of poems titled 'Widows Together'.


Homecoming
Our father is dying. He tells our mother so
when he steps off the train at Galway Station.

With specks of London concrete still in his hair,
he carries his cardboard suitcase home

with his bible, his dictionary, his references
that say he excelled in excavation work, dynamite.

He walks along the platform in his donkey jacket,
his broad shoulders mere shadow beneath the fabric
and all dreams of what might be, become undone.

Galway still in high spirits from the visit of John F. Kennedy.
Stars and Stripes continue to flutter from windows.

Still the whirr of helicopter blades landing in the Sports Ground.
Still the memory of music and dancing in Eyre Square,

the open-topped Cadillac moving down Shop Street,
Mainguard Street, Dominic Street,
and the whole of the town out to wave and cheer.

We visit our father in his starched hospital bed,
twenty-third of November, my ninth birthday.

He stares at the blocks that make up the cold aseptic room,
knows their heft, for he helped put each one in place.

We stand to the left and right of him,
tell him the biggest news in the whole world:

that JFK had been shot in Dallas the day before.
‘Sing me a song,’ he says, and we sing him ‘Charming Salthill.’

Only three years between them,
each man with hair dark as midnight, a bad back.

Our mother tries to lift our father up in the bed
when he cries out that he is slipping.

Jackie Kennedy holds her husband’s head
while blood spills from him.
Stars and Stripes draped over the coffin,
the white horses carried his body to Arlington.

My father’s funeral so small, I count
on the fingers of one hand the cars behind his hearse.

Two simple black dresses, mantillas.
The First Lady and our mam widows together.