Christmas Reading at the Village Bookshop 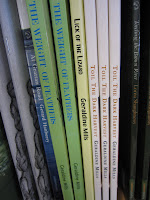 The last reading at the Village Bookshop, 12 Main Street, Moycullen was so successful that Anne and Niall have decided to host a Christmas session on Thursday 8th December from 6.00pm to 8.00pm. Escape the hustle and bustle of the traditional shopping day and sneak away to hear readings of a festive nature and enjoy some refreshments. I am delighted to be reading once again with Celeste Auge, Lorna Shaughnessy, Mary Madec, Moya Roddy and Pete Mullineaux. Here is a sample from one of my poems:

Snow Angels
If I were sky literate I would have read
the cold in the grey cloud
predicting snow on Maimean
that would be with us before long.
It fell from the great bed of weather
like the aftermath of a pillow fight,
settled on collars hurrying home from work,
in the secrets of stone walls.
turned rusted gates to pictures
Posted by Geraldine M. Mills at 11:06 AM No comments:

16 Days To End Violence Against Women

The Feminist Society of the National University of Ireland, Galway has organised 16 days of activism to end violence against women which includes a number of events around the city.

On Thursday 24th November, there is an Open Mic night of poetry and music at 9.00pm at the Ruby Room in the King's Head.

Entry is free and there will be a collection for the Galway Rape Crisis Centre.

I hope to go along and read some poems so if you want to perform or require more information about what is happening email: feminist@socs.nuigalway.ie
Posted by Geraldine M. Mills at 11:36 AM No comments:

All Ireland Poetry Day at the Big House

There is no better place to celebrate All Ireland Poetry Day than at the Tyrone Guthrie Centre, Co. Monoghan where I am lucky enough to be for the next two weeks thanks to Galway County Council. Poems and poets are to be found in secret pockets everywhere: The deer in the garden at midnight, the uplight of light, the pavlova.
There will be a reading this evening after we have feasted at the long table. Here is my one for today taken from my collaboration with Lisa C. Taylor, The Other Side of Longing (Arlen House, 2011)

Get a Life, Mr Rembrandt!
(Artist self-portrait at the Wadsworth Atheneum)

Unwrinkle the brow, plump up the lips

Botox the furrow between the mournful eyes

Airbrush the weak chin from your father's side,
that swarthy nose from your mam's

Get the toilet-brush hair gelled

A tattoo on the rippling biceps,
I luv u Hendrickje Stoffels

Put the grizzly bear coat up on eBay

Ditch the hat,
but don't let go of the hands.
Posted by Geraldine M. Mills at 11:47 PM No comments:

Song from an Unnamed Boy

This poem was written after I visited the cemetary at Letterfrack, Connemara in 2009 with friend and poet, Daniel Tobin. It is my attempt to give voice to all the young boys who died at the Industrial School due to neglect and abuse and are buried there. It is taken from my collaboration with Lisa C. Taylor titled The Other Side of Longing (Arlen House,2011)

When I was a child I ate fire for breakfast,
the dark was a lantern-shaped star
I pulled on a string with the moon bright behind me
through the world with its window ajar.

The clouds held onto the rain every morning,
the cows looked out to the edge of the sea,
until men told my father I only spelled trouble,
school was the place where my soul could run free.

That lie was a snake in the wall that was waiting.
When I rattled the loose stones, its venom fell out.
Bread that they baked held the sting of a scorpion,
eating their hypocrisy dressed up as devout.

My sorrow unmasked,they stamped on my laughter.
I was the lamb being dragged to the slaughter.
Posted by Geraldine M. Mills at 5:57 AM No comments: 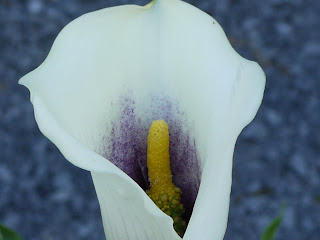 This beautiful Lily called 'Picasso' is flowering on our rather wet and windswept patio. It was given to us by our friend, Christina. According to its label, it thrives in full sun during July, August and September. I don't need to tell you that the conditions have not been exactly to its liking, yet it has defied the wind and the rain and never fails to inspire me. You would think it came from the palette of Georgia O'Keefe and not a sodden garden in the west of Ireland.

Oh, the dangers of reading too simply into what is presented to us.


You can find me reading at the following venues during the month of September come rain or shine:

Sunday Miscellany Live as part of the 34th Clifden Arts Festival. Saturday 24th September at 11.30am
Posted by Geraldine M. Mills at 9:10 AM No comments:

To celebrate National Heritage Week, I am delighted to be reading at The Village Bookshop,12 Main Street, Moycullen, Co Galway with Celeste Auge, Moya Roddy, Lorna Shaughnessy, Gerry Galvin and Pete Mullineaux.
It's on Sunday 28th August from 4.00-6.00 pm. Located in the heart of the village this store is not just a bookshop but a world of local and international interest stories, handmade cards and a warm welcome. Would love to see you there.
For more information on National Heritage Week click here

blog with a small b 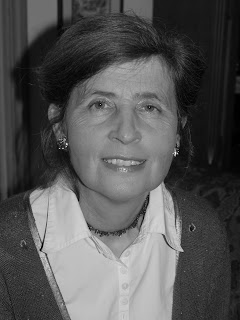 Writers cannot work in isolation so here is my blog spot where I can tell you about my work and my writing life. I'll announce my readings and share new writing with you as well as some favourite poems. Here is the place where you will find out venues for my readings in Ireland or the United States. Dates of poetry and short story workshops will also be included. To find out about my advanced short story writing workshop online, please click here