Memories of a Residency 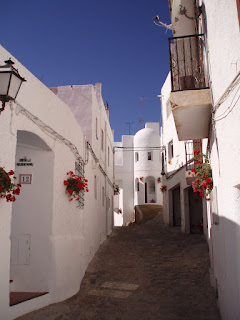 ‘This afternoon has gone mad with figs and heated sounds,’ the poet Lorca wrote and so it has. This blast of Irish heat over the last few days reminds me of my first international residency, Fundación Valparaiso, in Mojacar in the southeast of Andalucia that I had the great fortune to experience some eighteen months ago. It provides food and board and a working space to artists every month for ten months of the year.
I was given the room named after Lorca, with sleeping area, workspace and balcony that looked up towards the pueblo with its white, cubed houses stacked high on the side of the mountain. Sebastian was in the garden, cutting down the almond trees. Their blackened trunks, destroyed in  the previous year’s fire were being reduced to logs of almond fuel. His chainsaw whined in the hot, Spanish air. Blue fell through my open window.
There were eight of us, six visual artists, one composer and me, the only writer. People  travelled from as far apart as the Ural Mountains in Russia to Vancouver Island in Canada and many countries in between. We met up for pre-dinner tapas and took the first tentative steps towards fellowship. We were served cockles and mussels and squid, its ink dark enough to write with.  We broke bread together, pan, brot, chleb. A gecko took the last rays of heat from the wall. I could hear the crickets singing each to each.
Morning came, gilding the tiles of my floor, and from across the balcony, Iris the Slovak composer had already started the first notes of her new composition.  I headed out into the world of figs ripening, red peppers drying on the path. On the dusty walkways around the residency I saw the devastation of the fire of the summer before that swept down from Holy Mountain and consumed the valley.  The pomegranate tree held up charred arms still bearing its exploded wine apples, their claret jewels turned to ash. The branches of an almond tree clutched onto their last, sooty harvest. I cracked one impermeable shell; the nut still firm though held an aftertaste of conflagration.  At a neighbouring house, a scorched, skeleton cactus tried to make good its escape, by pushing its only green prickly shoot through the iron bars of the gate.  I walked back to my room and wrote.
In studios opening onto the arid landscape I got a glimpse of how this terrain informed my companions’ paintings that they pinned to the walls of  their studios, dogs, stones, scorpions.  Searching for a common language, we worked with whatever words we had in common as our minds became alive to the possibilities, the difficulties of communication.  How did I get across what I wanted to say: please, bitte, por favor.  Thank you, danke schön, spasiba. The wind came up at midday, shutters slammed shut.  Ideas blew away; I ran after them and tried to tie them down in my room that looked out on the mountain with its rich Moorish past.  Hungry for stories, for images, the words came, eating up the blank screen. They crept out of shadows or flew in on the wing of an egret to drop temptation at my hands. With the urgency of fire I wrote as I had never written before. I set alight an idea across that arid landscape of page, and watched the white swallow it up. ‘This is no small gift,’ I said to myself, ‘this space that I have been given.’

Posted by Geraldine M. Mills at 4:00 AM No comments: