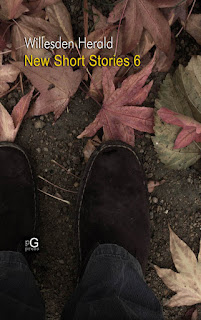 Frost Heave which was a winner in the Willesden Short Story Competition earlier this year and included in the anthology New Short Stories 6 is now available in its Kindle edition from Amazon
Here is the opening extract from the story:
Frost Heave

Night and the bitterness so much in his mouth that Folan could taste his own liver. The moon full, full over the stone walls, the fields, silvering all it shone on; air frost killing the hedge around him as he sat crouched in the back of the hen house. He held his shotgun close, cold biting into his hands until he had to squeeze them under his oxters to keep the feeling alive in them. That morning he had come out, cats scratching at the door for their breakfast, and found six of his hens scattered across the dirt-floor of their coop, heads lolling to one side, the blood sucked out of them. Killing for sport, killing just to taste death. He blew on his hands again, his breath chilled before it ever got to them. He was tired of things being taken from him. He hadn’t seen it coming. He hadn’t seen it at all.
He had filled himself with the dinner before he came out. At times like this it helped to have a full belly, though he was beginning to get tired of the meat that stuffed his freezer. Still, too good to be wasted. A couple of weeks earlier, out hunting, he had come across the stag lying in the ditch. Beautiful beast. Struck by a carload of lads coming back from the pub; left lying there. Folan had taken the gun from his shoulder, pulled off his jacket and covered its indigo marble eye, glassy with pain. The import of the shot rang through the woods and was muffled by the trees as the upper body shuddered. The hind quarters, already broken, never moved. Eyes flickered out and Folan stretched over to close them.
It was a bitch to get the animal into the trailer but he did and drove it back, pulled it into the yard with its powerful antlers all rutted out. He winched it up into the roof of the barn with a pulley. Bled it, grallocked it. Threw the guts into a barrel in the corner. The ease with which the pelt came away, the animal still warm, like it had just slipped off its coat in an overheated room.
Ireland falling into the ice age and the carcass froze right through to the ribs. No choice the next morning but to take the chainsaw to it and carve it up as best he could, the meat all jag-damaged at the edges as he piled it already frozen into the freezer. It would take him a lifetime to eat so much flesh on his own. Now.