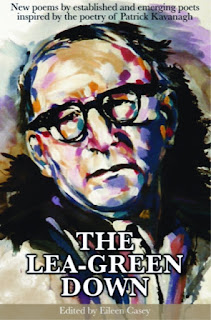 I am so delighted to have a poem in Lea-Green Down, an anthology of poems by established and emerging poets who have been inspired by the poetry of one of our greats: Patrick Kavanagh 1904-1967. From the striking cover image of ‘Man and Poet’ by Irish artist, Paul McCloskey, to the fine opening essay by Gerard Smith, to the thought-provoking call and response of each poem, it is exquisitely published and edited by Eileen Casey at her own Fiery Arrow Press.

Launched by Kavanagh Scholar, Dr Una Agnew, on 18 July in the Irish Writers’ Centre she summed it up perfectly in her speech when she said that:
The army of contemporary poets that grace these pages, some neophytes, some seasoned bards, winners already of prestigious literary awards: all have a voice in Eileen Casey’s unique collection. These also, testify to Kavanagh’s enduring mentoring influence. Each poet here, turns the lea green down and opens a new furrow that responds to or reflects in a new way on a chosen Kavanagh poem.
It is a work of the miraculous to see how each writer transforms an image from the established poem to something that indeed opens a furrow into a new and different world. This is a book to be cherished, to be taken down and read over and over again.
I have always loved his poem, ‘Memory of my Father’ and once I started working on my response it took me in a surprising and contemporary direction for: 'I Keep Looking'.

Memory of My Father

Every old man I see
Reminds me of my father
When he had fallen in love with death
One time when sheaves were gathered.

That man I saw in Gardiner Street
Stumble on the kerb was one,
He stared at me half-eyed,
I might have been his son.

And I remember the musician
Faltering over his fiddle
In Bayswater, London,
He too set me the riddle.

Every old man I see
In October-coloured weather
Seems to say to me:
‘I was once your father.’

Every young girl I see
reminds me of my daughter,
when she was unloosing the old coat of herself
to step into this world she would master.

The slip of a thing on the Ha'penny Bridge
who smiled at me was one,
(when all others rushed by, heads bent, no apology)
her nose-stud – a newfound sun,

and the little one only last week,
who waved from the top of the bus
as if to remind me I do exist,
within my house of dust.

Or a day when the stropped blade
of wind sliced up along the Quays,
a butterfly tattoo between forefinger and thumb
dropped a coin in my shivering cup.

Every young girl I see
in school uniform or knee-torn jeggings,
might one day say to me:
‘I am still your daughter.’

Posted by Geraldine M. Mills at 3:05 AM No comments: