This Street with Looking-glass Eyes 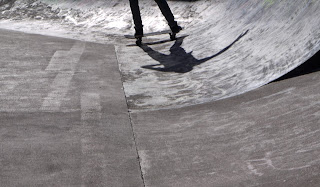 
This Street with Looking Glass Eyes

‘Bring me back great stories,’ Andrew’s sister says. She is sitting up in bed her arms clasped around her knees, blue eyes waiting for him to sweep them clean of any dreams. ‘Bring me back a big slice of the city in your rucksack.’
‘With or without pepperoni,’ he jokes. Then he leans over, kisses her cheek and picks up his keys. He files away the tall order she has presented him with and head out the door, pulling his parka more tightly around him as he hits the cutting air. He makes his way along the street. People are already moving in and out of the day. He heads towards the shops, walks by the square where the homeless are scavenging the bins of the homed. They pull out chicken bones, empty pockets of pita bread; upend a can of coke to see if it still has a dreg of sugar left inside. He burrows his way through the aisles of the supermarket; buys what’s needed to keep flesh under their skin and heads back to where she is waiting for him. How thin his sister, how very sad her eyes.
‘What have you brought me?’ she enquires.
‘A bowl of fresh morning air.’
He curves his hands and holds them to her face. She feels the cold of the new day on his fingers and caresses them before she secrets her own back under the duvet.
He sets up a tray for her, cheese from the new cheesemongers, bread still smelling of the oven it was saved from, some wild acacia honey. He takes out a fresh napkin depicting a scene of girls and bridges and blue weeping willow, tucks it under her chin.
‘My very own restaurant,’ she says, as she plays with dripping bee sweetness onto the bread, moves it around the plate he has placed before her. Stocks and shares fall on the other side of the city. Mortgages default. Businesses fold in on themselves while she cuts the bread into little cubes; stacks them into columns three squares high, playing with them like a child; pretends she doesn’t see his frown, his threats if she doesn’t eat. She knows that she is pushing her luck with him
Finally she takes a mouse-bite out of the wheaten loaf.
‘Where are my stories?’ she demands, lifting the napkin to brush crumbs from her mouth. So he tells her, embellishes the things he has seen on his domestic expedition. How there were archaeologists excavating ruins near the top of the square. A woman in a high-vis jacket was sweeping soil from the bones of an ancient bird with a small paint brush while a man numbered shards of plates that still held a tracery of leaves and vines. Another turned to a collection of battered drinking vessels with the memory of some magic potion. Some day it would teach the world to sing.
‘All those things you can see in a single trip,’ she says.
‘It’s simple,’ he replies. ‘All you have to do is look.’

Posted by Geraldine M. Mills at 7:08 AM No comments:

Me and Nu at Coole Park Autumn Gathering 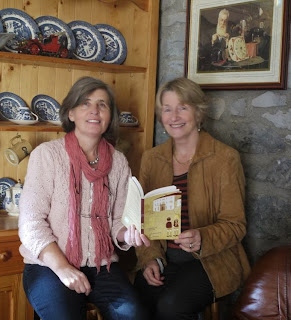 
As part of The Lady Gregory Autumn Gathering, which this year is celebrating Irish Women Writers,  Hedy Gibbons-Lynott and I  are  performing a kitchen reading of Me and Nu by Anne Gregory, as well as our own work tomorrow, Sunday 6th October. Many thanks to Marion Cox for inviting us. A day that is packed with inspiring events, times and venues are as follows.

13.00 Literary Lunch with acclaimed Local Writers. Hedy and I will be there too.
The Gallery Café

15.30 Book Launch: Spirit of the Burren  by Jackie Queally
Gort Public Library
Posted by Geraldine M. Mills at 11:30 AM No comments: