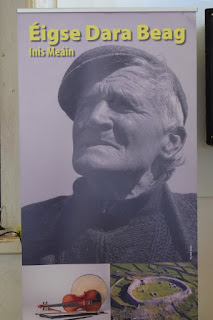 The first Éigse Dara Beag will not be its last, such was its huge success this weekend  6-8 October. Inis Meáin, the middle island of the Aran Islands  hosted a celebration of their native poet that I am sure would have made him very proud. It was a great privilege for me to be a tiny part of it, having been given the opportunity to read some poems 'as gaeilge'.

I had attended a week-long course there in the summer, staying in Mairtín Cois Cuan's B&B and going to classes in the 'halla'. Coming from a house that had no grounding in the language, I was terrified by it at school but have always loved its intrinsic music.

'Tá sé in am an bád a bhrú amach,' bainisteoir, Ciarán O Cheallaigh said to me when he invited me to read some poems at the celebration. I had no excuse and knew that if I didn't give it a go now I never would. Pushing out the boat was a risk as there was every chance that I would fall out and have to be rescued. Thankfully, that didn't happen. Having to read after the local and established poets was daunting but everyone was very kind and I am delighted to have seized the day. Ciarán's translations are  top class  and capture perfectly the essence of the work.

The programme was rich and varied from sean-nós singing workshops to lectures on music, to the music itself. It is the very special experience to be able to walk from venue to venue, no need to get into a car. To watch people walking from the old pier or the Dún or the church. Voices carrying sweetly on the blue-skied sunny day.  Harp and fiddle in perfect harmony, as the notes flowed out the door of Tigh  Chonghaile onto the road, over the stone fields, across the sea that sparkled like a summer's day and anyone on Inis Oirr or the Cliffs of Moher wanting to swim over to be part of it. You had to be there.

My gratitude to Ciarán for all his work and especially the translations which I have copied here. Thanks also for the kindness of everyone I met, especially Mary Fleming and Máirtin for looking after us so well.
Photographs courtesy of Peter Moore.

SOMETIMES A WOMAN
after Rilke

Sometimes a woman
stands up from the dinner table
and walks out the half-open door.

She keeps on going, though
she doesn’t know where,
and the road catches darkness

long before it falls.
Black thoughts she stills
with an urgency of stars.

It came at twilight, the silage cutter,
when sky promised the shepherd’s all,
and little sunburnt bodies
wrestled with sleep.

It ploughed up curfew’s silence,
while I, casting off my bedtime routine
lifted my son from his sleeping
to stand bewitched at our summer window.

Clouds of sweetest smelling became our breathing
from blades that knifed a second sward.
It tore through nests and hiding places
Its light – fireflies in the dimming.

Afterwards with moon full,
I took my bucket to the well
With thoughts of the scythe hanging
Impotent. The corncrake silent.

From: Unearthing Your Own (Bradshaw Books, 2001)

Aimseoidh sí a cuid torthaí féin,
piocfaidh sí iad is íosfaidh sí iad
leanfaidh sí an boladh ar an ngaoth.
Is craoibhín beag bídeach mé ag lúbadh.
FRUIT FALLING
It is the morning of my daughter's leaving.
She is still asleep, her cases in the hall eager to be gone
while I have packed all I will
into the seed purse of her memory.

She leaves stars on the floor for me to sweep up,
sky fires fallen from some show,
some moment when she shone.

Haws ripen, guelder swells with the future,
apples shiver in the waiting light,
are learning the language of letting go.

She will find her own fruit, pick and eat it,
follow its scent on the wind.
I am a small branch bending.