I have spoken to no one for days
but the small bird with the black band
of neck as it bobs its way in front of me,
feigns nesting in the torc of wrack in the sand

and a man in a scrapie wool jumper
picks broken teeth from the strand;
if he opens the black cavern of his mouth
and utters three, two, even one word
I’ll be gone with him.

The day comes when you can no longer
squeeze into the old coat of yourself.

Slievemore stays where it is,
has never moved its whole old life
but waits for the farmers to shift
their animals up and down with the seasons.

My bones know change the way birds know sky,
the way they let go of the light over the deserted village
the way the grass knows it, bitten down to the quick.

'Is that a Galway accent?' by Anne Marie Kennedy 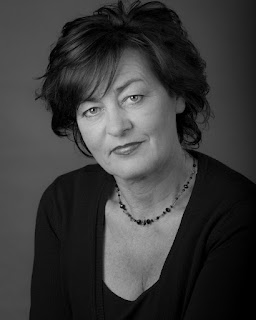 Award winning Galway writer Anne Marie Kennedy will launch her debut CD, ‘Is that a Galway accent?’ in Charlie Byrne’s bookshop, on Friday April 20th at 6.30 pm.
I am honoured to be her special guest at this unique event. Not to be missed.

‘Is that a Galway accent?’ is a collection of previously awarded, published or broadcast work, reaching across topics of an infidelity hedged, mothers’ secrets, a trapped rat, the perils of decorating a Christmas tree, how to assist a calving cow and the wisdom of tinker women.
Anne Marie is the winner of the Molly Keane Creative writing award 2014. Her play, A Matter of Modesty, was runner up in P.J. O’Connor Radio Drama 2016 and subsequently won two golds at the New York International Festival for Radio, in Best Scheduled drama category for RTE and Best actor for Eamonn Morrissey.
She is an editor, shadow writer, freelance journalist, creative writing tutor and performance poet. Her work has been widely published in literary anthologies in Ireland, the U.K. and in North America where her non-fiction was chosen by Jonathan Franzen for Best American Essays 2015. She is shortlisted for the Percy French Comic Verse Award 2018 at the upcoming Strokestown International Poetry Festival.
Also reading will be readers from River Art Creative Writing Workshops: Candy Carrick, Sarah Fahy, Brenda McGregor, Louise O’Neill Vance and Carole Staunton.

Posted by Geraldine M. Mills at 2:46 AM No comments: 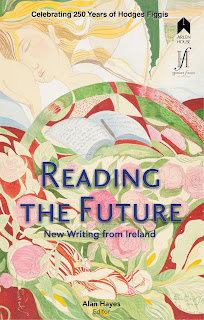 Edited by Alan Hayes and published by Arlen House and Hodges Figgis, 'Reading the Future: New Writing from Ireland' celebrates 250 Years of Hodges Figgis. It will be launched by Josepha Madigan, TD Minister for Culture, Heritage and the Gaeltacht at Hodges Figgis Bookshop,56–58 Dawson Street, Dublin, Thursday 26 April at 6:00pm.

I am thrilled to be included in this beautifully produced anthology with so many of our great writers. Congratulations to Alan for the months of work he put into it.
Posted by Geraldine M. Mills at 10:59 AM No comments: