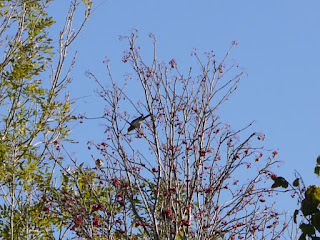 I cannot read the ocean. I am a lands-woman, and all my life have been drawn to the sanctuary of trees. The house of my childhood was called Hazel Grove, the grove being a small wildness of hazel bushes beyond our back garden. It was there that my siblings and I spent our days, for that small coppice reared us. We were not feral, no not feral, more like hunter-gathers that scavenged briars and branches throughout the growing season. We threaded wild strawberries onto long filaments of grass; purple stained our mouths with blackberries that we had cooked over our daily campfires. We gnawed the flesh off ripe haws as if they were miniature apples, only ever returning to the edge of our boundary wall when a growing spurt made us extra hungry and we shouted into our overworked mother that we wanted ‘a piece’. She understood that single word and did our bidding, hurried out to hand us a piece of bread and jam that we demolished before we hightailed it back to the under-wing of branch, of leaf.
But it was when it came to the hazel tree that we were true foragers. We knew nothing of its reverence in Celtic lore or Greek mythology, its connection to divination and dowsing. We did not know that the messenger of the Gods, Hermes, carried its stick or that poor demented Aengus went off wandering in its wood with a fire raging in his head. But we knew its power all right.When we had done something particularly punishable, our mother lined us up on the cold kitchen floor, cut and peeled a hazel wand and threatened us by putting it under each of our noses. “Smell that, smell that!” she commanded. It was all it took, its potency so great that just to sniff its mystical scent had us quivering in our standing and forced confessions from us as effective as any interrogator.
Nor did we know that its fruit was equated with wisdom and poetic inspiration: That it was the hazelnut falling into the mouth of the salmon of knowledge that in turn made Fionn Mac Cumhaill the clever clogs that he was. All we knew was that when autumn came we were connoisseurs in the art of gathering. We tracked the timing of its development from the white embryo of early summer to a blush of pink that appeared on its August shell. We studied the branches, debated the way the cobs hid themselves under leaves, and rated their grouping from the paucity of a single one to the magic of a five- star cluster. Like the best hunters, we learned by experience that unripe nuts were not for consumption. They gave us black mouths and angry rashes that had us scratching all night and our mother worn out going from bed to bed to soothe arms and legs with calamine lotion. So we practised denial, not touching such temptation until days began to lose light and shells bronzed, hardened, turned nut-brown. We had the knack when it came to checking them for ripeness. One push from the thumb and they had to surrender from their sheath, gracefully. It was then time to grab our paper bags, head off into the day, climb stone walls; cover tracts of mossy terrain to search out the bread of angels.
We found them, gloried in their silent letting go as they yielded to our waiting hands. Those that were stubborn within their bracts we didn’t push. As with our mother, we knew when there was no shifting them. Our bags now full we squirreled our bounty back home. We sat, a study of deep meditation, at the gable end of the house. Nothing distracted us from the labour, each with our own chosen stone snug in our palms as we clacked away. The sound of granite on shell echoed throughout the village and one by one we split the brown casing to reveal its sweetmeats.
And then came the best bit. We filled bowls with the brown kernels, topped them with sugar and milk and feasted on our largesse. We never knew until we were much older and the word became part of breakfast vocabulary that we had created our own Muesli, Galway Muesli.