Launch of 'Rising Beyond' 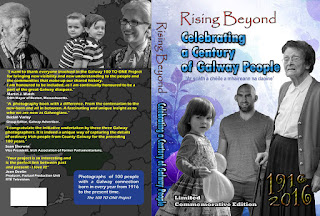 What a great buzz there was in the City Museum, Galway, last Thursday, January 21 when babies and nonagenarians alike were celebrated in an exhibition of photos titled  'Celebrating a Century of Galway People 1916 to 2016.

The 100 TO ONE Project  is the brainchild of three Galway-based photographers: Ian McDonald, Enda O’Loughlin, Bill Barry and journalist, Caroline Whelan. And what a refreshing idea it is to commemorate 100 years since Ireland’s Easter Rising by celebrating the people of Galway born in that time.This was a huge undertaking, finding people whose age matched each of those one hundred years.

The exhibition and book are a really important portrait of a century’s social history as each subject’s birth year is displayed with a short biographical note as well as some of the news headlines of that year. The fact that the text is also in Irish is an equally ipportant aspect of it as it gives a platform to our native language.

As the introduction says: ‘the subjects chosen represent people from all walks of life and ethnic backgrounds who have made a contribution to community in general: be it national, county, club or parish. For some it has just been the happiness they have brought to their own families. The totality of their input has contributed to the many positive changes which have taken place in County Galway over the past century.’

This is a limited edition so it is highly prized and selling like all good books should. None of the creators will be retiring on the proceeds as they are giving all profits to charity. It has been a real project of love taking over two years to complete so if you haven't bought a copy yet, then hightail it to the Enable Ireland Shop and the St Vincent de Paul Shop in Galway City and  News and Choose Bookshop in Loughrea. Also check out www.Kennys.ie

My thanks to Andrea Parry for the photo below with  Ness Porter Kelly in front of her portrait and Andrea.

Congratulations to all who got it off the ground and already it's getting lots of publicity. It will feature on Irish TV 'Galway Matters' and the launch featured on Tg4 last week: Link: http://www.tg4.ie/en/player/.

Reading for the snow 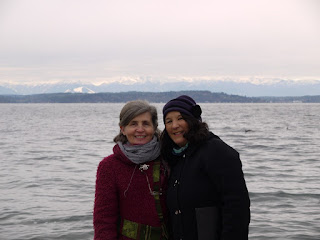 True friendships are those that hold through absence and long distance. Having the chance to meet up with my dear friend and poet, Susan Rich, last weekend, filled me with gladness as once again my husband and I took the ferry across Puget Sound to meet her in her home in Seattle.

It was time luxuriously shared with good food,  discussion on favourite writers and the mystery that is this life of ours. In her house of sky we could see from her writing room red-tailed hawks and the snow on the Olympic Mountains. Spending those precious hours talking with her and her partner, Jeff, soon opened that squeaky door of creativity for me that is inclined to blow shut sometimes from all the storms of life and living.

We had breakfast in the Easy Street Café, food for the body and the soul with its collection of vinyls and CDs, and a menu that mirrors the music on the stands. Trying to decide between a Dolly Parton Stack or a Salad of John and Yoko, I finally settled on a Little Richard: Eggs, bacon and hash browns.

One of our traditions that we have built us since our first meeting in The Tyrone Guthrie Centre, many years ago is to find a place where we can do a reading for one another. We have read our poems on mountains, by rivers and in bell towers. This time it was on Alki Beach, as people walked by with their dogs or their cell phones while the sky was building to let go of more snow. I had the privilege of hearing some new poems from Susan and I read from An Urgency of Stars and The Other Side of Longing   (both from Arlen House) which is the collaboration with my friend Lisa C. Taylor from Connecticut.


I was no sooner back on the ferry heading home but the pen was out, the pages of my notebook becoming gravid with new images, words that filled the sound of my imagination. Once again, sustained, enriched, ready to face a new story.
Posted by Geraldine M. Mills at 1:58 PM 4 comments: